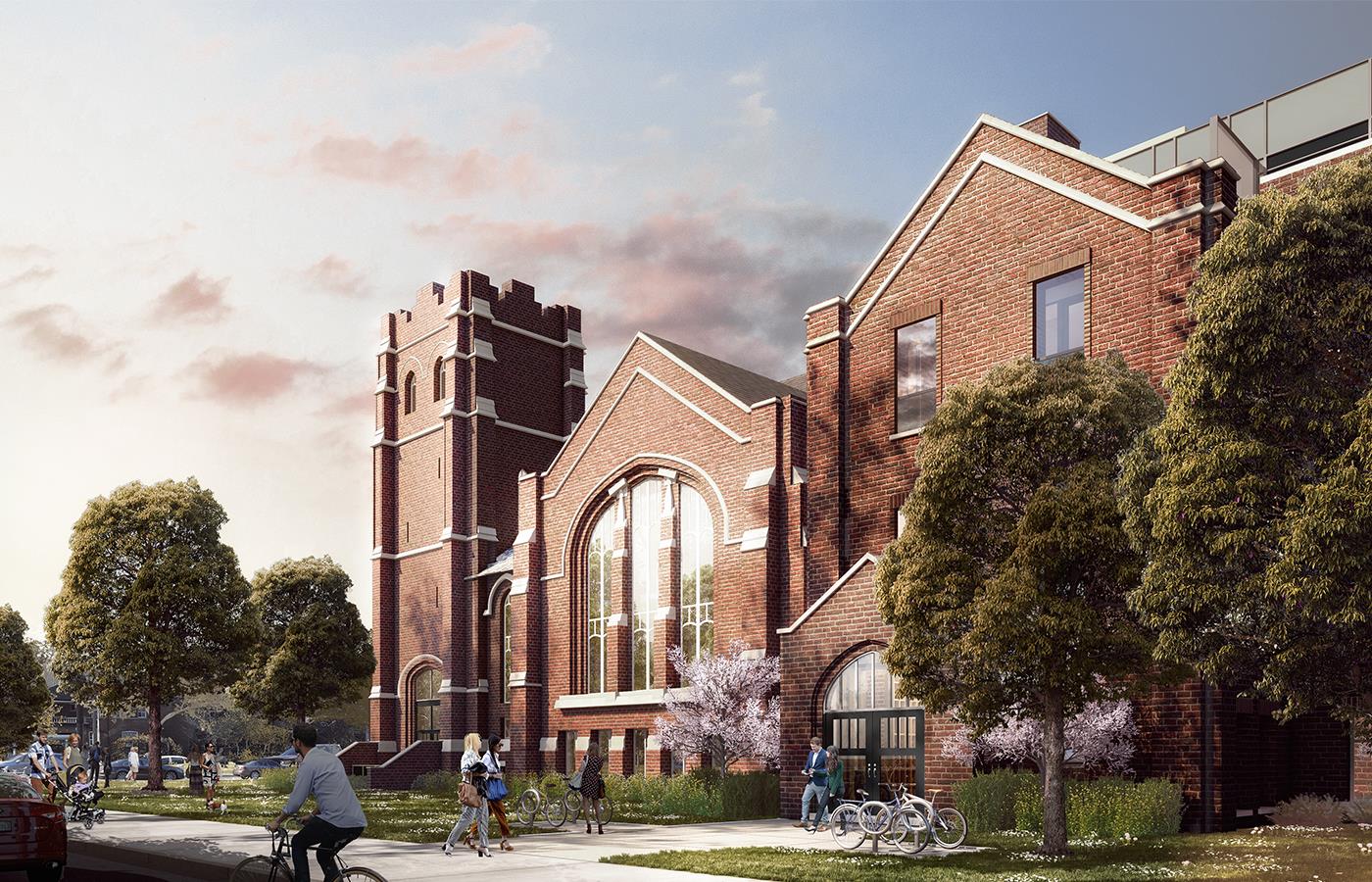 As Toronto’s churches face declining attendance, a number of these grand structures are being repurposed into residential developments. The latest such project to begin construction is the former High Park-Alhambra United Church at the southwest corner of Annette Street and High Park Avenue, where Medallion Capital Group recently broke ground on their 260 High Park Church Lofts and Residences development.

Earlier this month, project principals, purchasers, friends, and family gathered at the site of the new development to ceremonially mark the start of construction. The image below shows Medallion Capital Group’s principals Mike and Chris Giamou (L-R wearing poppies, at the centre of the photo) along with their team bearing ceremonial shovels to commemorate the occasion.

Chris Giamou, Medallion Capital President and Co-Founder, took the opportunity to announce that “The project is over 75 per cent sold. The High Park area is an esteemed part of the west end of Toronto and a thriving community—from the beautiful park just minute away, to the Bloor West Village and Dundas West neighbourhoods, there’s a ton of character making it such a desired place to live. We recognized these attributes and wanted to develop something unique but still beautiful.”

With the bulk of the 55 units sold in the new building, Medallion has released the limited collection of 15 suites that will be housed behind the restored church facades. Medallion Co-Founder Mike Giamou stated “There are 55 suites in the new residences that range from 632 to 2,567 ft² and 15 Church Loft suites that range from 837 to 3,081 ft². The building is also equipped with top-of-the-line amenities that include a striking courtyard entrance, 24/7 concierge services, a multi-purpose lounge with two-way fireplace, full custom built-in kitchens, complete fitness centre, and a custom landscaped rooftop area with lounge seating, barbecue and fire pit.”

The project includes a new four-storey wing with a contemporary design by local firm Turner Fleischer Architects, while preservation and conversion of the heritage church is tasked to Boston-based Finegold Alexander Architects—known for their sensitive and creative work on similar church conversions—working alongside Toronto-based heritage specialists ERA Architects. The space that Finegold Alexander is working within to create some of those spaces can be seen in this archival photo circa 1950 of the sanctuary’s interior.

Additional information and images can be found in our Database file for the project, linked below. Want to get involved in the discussion? Check out the associated Forum thread, or leave a comment below.

UrbanToronto has a new way you can track projects through the planning process on a daily basis. Sign up for a free trial of our New Development Insider here.