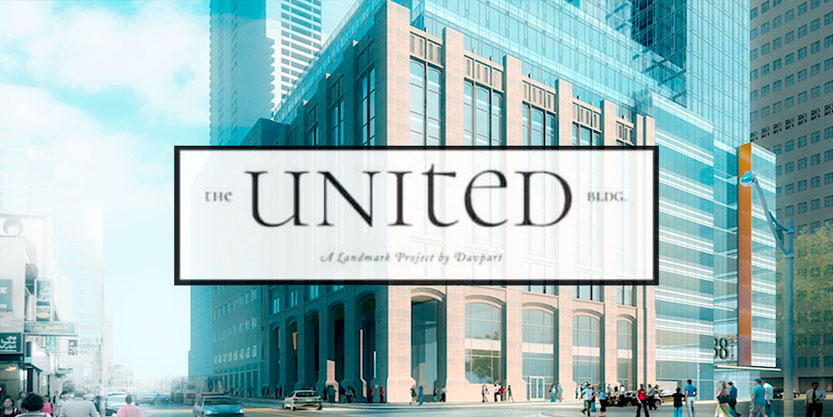 TORONTO, ON – April 30, 2019 – The UNITED Bldg. taps into a trend of adding condo buildings to commercial Buildings along Toronto’s grand University Avenue.

For half a century, a city block at the intersection of University Avenue and Dundas Street West in Toronto was the heart of a publishing empire. It’s about to become one of the most central residential and office addresses in the city.

The project to transform the block is complex because the structures of two large and significant heritage office buildings are being retained. The existing 10-storey commercial buildings will keep their foundations and exterior appearances, while their cores will be removed to excavate for two storeys of parking and retail floors below grade. A new tower with 45 storeys of condominium residences will rise between and over them.

The complex is called The United Building and it’s part of a trend of adding residential space to downtown University Avenue, which until recently was predominantly commercial. Across the street, the Residences of 488 University by Amexon Development Corp. are rising in a tower built above the former 18-storey Global House office building, built in 1968. To the south of Dundas, Tribute Communities’ 42-storey residential complex has risen above the historic Royal Canadian Military Institute.

Developer David Hofstedter, president and chief executive officer of Davpart Inc., sees his company’s United Building as part of a growing international phenomenon as well. “The concept has been successful in New York, Paris and other major metropolitan centres, where apartments cohabit with corporate, commercial and retail venues on grand thoroughfares,” he notes.

The University Avenue location lends itself to living and working because it’s within walking distance of the University of Toronto, the Ontario Legislature, many hospitals, the financial district and the Eaton Centre shopping mall, among other notable downtown destinations and employers.

This project will retain as much as possible of the block’s two heritage buildings, says Graeme Stewart, a principal at ERA Architects, the Toronto firm hired as heritage consultants to plan the restorations of the façades to their original looks.