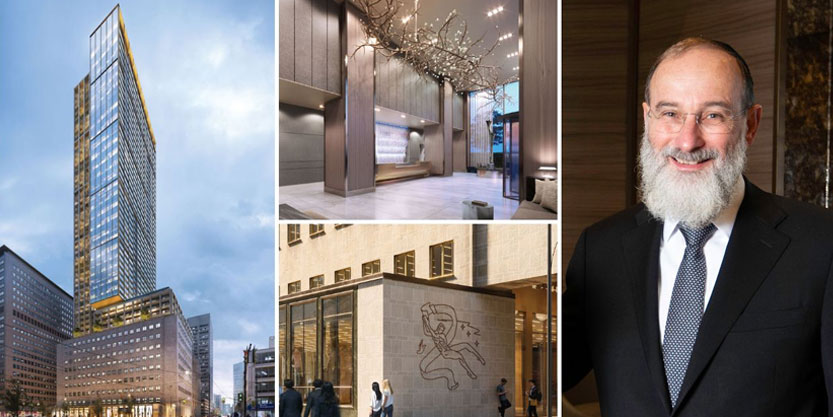 NEW YORK, NY – September, 2019 – DAVPART’s David Hofstedter says, “Luxury is about a home that gives you peace and allows your spirit to soar.”

When David Hofstedter, president and CEO of Davpart Inc., unveiled plans earlier this year to turn the Maclean Publishing Co./Maclean-Hunter Building in downtown Toronto into a residential and retail high-rise development called The United Building, it was the latest in a string of former publishing headquarters being reimagined into condo and retail projects—including the Tribune Tower in Chicago and the San Francisco Chronicle building.

Mr. Hofstedter, 64, founded Davpart, a real estate investment and property management company headquartered in Toronto, in 1993. Before that, he got his start in his family’s business, H&R Developments, a major Canadian real estate company. He is still a partner in that firm.

When Davpart started, it had three industrial buildings, but the company’s portfolio has expanded to more than 90 industrial, office, retail, and residential projects in Ontario, Canada, and the U.S.—including Avro Condominiums in Toronto and one building in the Sanctuary Development in Boca Raton, Florida.

We caught up with Mr. Hofstedter to discuss how one project falling through opened another door, the importance of accessibility and amenities in buildings nowadays, and more.

David Hofstedter: At this stage in my life, it would probably have ease of living. Plus, amenities, security, and a sense of history. And great architecture. Also something with an appreciation of nature and outdoor space.

Overall it’s something with the conveniences of modern life, so that I can be connected with the world I live in, but that has a strong connection to history, architecture and great views.

MG: Do you have a real estate property that got away?

DH: There was something that was disappointing at the time but was very fortuitous.

My parents came to Toronto penniless. And my father founded a real estate company here. When I was a kid, in 1967, with some partners, he assembled a block of land on the northwest corner of Yonge and Eglinton streets. It was the largest mixed-use development in Canada at the time. I was fascinated with that as a kid. About 12 years ago or so, that property came on the market. I wanted to acquire it. Because I saw the potential, not just because of the history. I lost out.

Shortly thereafter, 481 University [also called The United Building] came on the market and it felt magical. It’s in tn the heart of the city, connected to the subway. It’s right by the opera house, near the retail hub of Eaton Centre. It has great architecture and had housed a huge publishing house. It comprises a full city block but was underutilized.

Losing the other one enabled me to get this one.

MG: What does luxury mean to you?

DH: It means different things to different people. It’s what people aspire to. Sometimes it means trophy assets, bragging rights, showing they’ve arrived, showing what their net worth is.

To me, luxury is an environment that gives peace of mind and the comfort that allows your spirits to soar.

MG: What area do you think is the next hub for luxury properties?

DH: In general, the world is facing increased challenges of safety and security. There’s also concern about the safety of investments and people’s net worth, global trade tensions, tax changes and complications.

But the next hubs are those areas where people perceive physical safety, safety of capital, amenities and accessibility. People want to live in places that are accessible in part due to traffic concerns, and due to environmental concerns of driving, too.

Downtown Toronto is really growing, especially the parts where you have ease of access to amenities. In Toronto there’s an airport right off downtown.

In the downtown core, if it has outdoor areas and views to the lake and indoor/outdoor amenities, it’ll be highly sought after.

In areas with year-round great weather—Toronto is not one of them, by the way—you’re even better.

A great second-home location is Muskoka. You can get on a plane from Toronto and be in Muskoka in 20 minutes.

More: Italian Architect Says a Building Should Be ‘Timeless,’ and an Apartment Should be Comfortable

What is most appealing to me, is where there’s a synthesis between modern and classic architecture.

MG: What’s going on in the news that will have the biggest impact on the luxury real estate market?

DH: The underlying theme is stability. What’s going on in America is an underlying social upheaval. That has an effect on luxury. I do think that’s one of the reasons places like Victoria, British Columbia, have spiked.

More: A Great Home is All About Context, Says Architect David Childs

MG: Where are the best luxury homes in the world and why?

DH: “Best” is a relative term. It depends on what one is looking for. In terms of investment, that would be in emerging areas, and Toronto would be up there. Prices have risen considerably in the last number of years, but it’s still well behind other areas, like New York. We have a relatively weak Canadian dollar.

The hottest luxury market is Victoria, British Columbia, because of the stability of Canada, beautiful views.

MG: What’s your favorite part of your home?

DH: The dining room when we get the family together—children and grandchildren. We have a very large dining room.

More: Hamptons Real Estate Investor on How to Buy a Second Home, the Benefits of Waterfront, and More

MG: What best describes the theme to your home and why?

DH: Uplifting. It has high ceilings, open areas, and views. My home in Toronto overlooks a beautiful ravine. The sunshine and open areas create a feeling of an uplifting spirit. It’s about raising spirits and broadening horizons.

MG: What’s the most valuable thing in your home?

DH: The collection of books in my study.They are mostly books on Jewish law and ethics. Some are ancient, some first editions. I’ve bought them through dealers.

DH: Look at the long-term, what will have enduring value. Sometimes you need to sacrifice short-term gains for long-term appreciation.

MG: What’s the best area for investing in luxury properties?

DH: Anywhere with continued stability—social, political and in terms of safety.

MG: What area currently has the best resale value?

The highest resale values have been recorded in places around the world—Hong Kong, Monte Carlo, New York and London. Those are traditional.

But there’s a lot of unrest and instability. Will Hong Kong continue to thrive? Will France? It’s hard to know.